Miller has not returned to Broadway to make anyone laugh 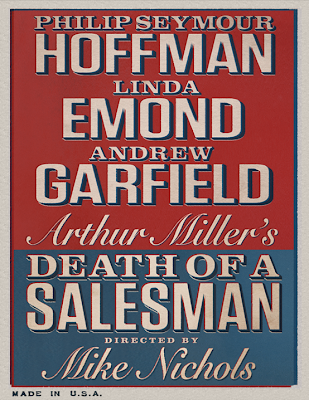 "The play is about mortality and the possibility of a trace.
Willy Loman is trying to write his name on a cake on a hot July day".
Arthur Miller, 1949


Willy Loman is 63 years. He works as a salesman. He goes from door to door selling. Few people remember it. They have no words about it, neither good nor bad. But Loman did not cease in its efforts. He travels and sells, even if it cost him his entire life.
Loman’s story is a classic. It is a portrait of the American dream rags written by Arthur Miller 64 years ago.  Death of a Salesman was written in 1948 and released in the Morosco Theatre, in 1949, by Elia Kazan.
Death of a Salesman was created by Miller during the postwar period, when the American nation was already reeling from the crisis of 1929 and the triumph of the Allies in World War II with his optimism flooded the United States. Therefore, its revival on Broadway  by Mike Nichols on March 15th is the perfect time to question again is not the American dream, but the post-Bretton Woods agreement.
The character of the seller defeated trying to recover his good position is already a classic of American theater. Has been interpreted before by actors like Dustin Hoffman, Brian Dennehy and Lee J. Cobb. However, their profile becomes painful at a time when Wall Street and outraged occupy the middle classes feel cheated by banks.

Willy Loman has spent his life selling for the same company, until one day he is fired. He is forced to borrow money. He has shared a lifetime of marriage but deceives his own wife. Every day he gets his kids hate him more. He tries desperately to erase the mistakes he made, but without success.
Loman uns gets only solution: suicide, so his family can live the life insurance money. Thus, Miller creates the effect of a tragic end. The play ends with the grim scene of a funeral of a lonely man whose funeral only attended by his wife and children. No friends nor enemies. No knows or curious.
Recognized with a Pulitzer Prize, The Death of a Salesman was a play that forced an entire country to think that the American dream was that, a dream.
This is a play where everything is questioned. The seller of mechanical work that challenges his own failure, someone who did not progress up the economic ladder and could not form a family that respected him.
A man who is fired after years of loyalty to a company. A man who is a mirror of many today. A man who can not transcend. "The play is about mortality and the possibility of a trace. Willy Loman is trying to write his name on a cake on a hot July day" said Arthur Miller for the premiere of the work, for six decades.
Mike Nichols (who has won seven Tony Awards for his productions on Broadway is also known for films like The Graduate) has been able to choose the right time, also the appropriate casting: Philip Seymour Hoffman will play Willy Loman, Linda Emond plays the wife of Loman and Andrew Garfield, the actor who played the betrayed partner Michael Zuckerberg in the network act in the role of a son of Loman. Thus, Nichols brings back a work whose distressing story touches closely, very closely, viewers and readers.
Posted by La KSB at 1:16 PM